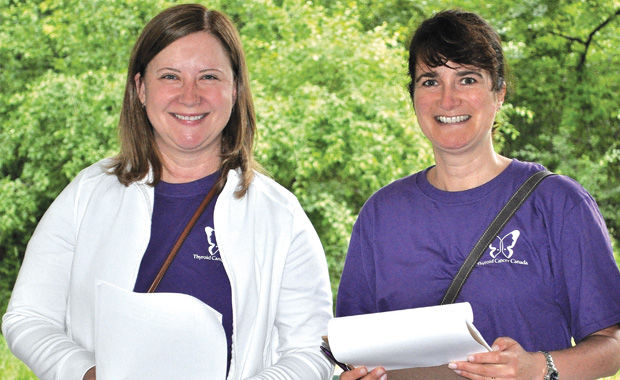 At a time when the general public is more well-informed about cancer than ever before, thyroid cancer remains an unclear and misunderstood disease. There is little known about its causes or how to prevent it.

“There is very little awareness about thyroid cancer,” explains Rita Banach, a thyroid cancer survivor and one of the founders of Thyroid Cancer Canada. “I think that’s because it’s still a relatively rare cancer and it’s also seen as very curable.”

“It’s often detected almost by accident. People may be having an ultrasound for an unrelated condition and a nodule in the neck is detected.”

While it has traditionally been more uncommon, the rate of thyroid cancer is increasing every year, faster than any other cancer. Over 6,300 people will be diagnosed in 2015 — up from 3,400 a decade ago. Over half of people living with thyroid cancer are between the ages of 15 and 49, and almost 80 percent of them are women. Yet despite the alarming incidence of the cancer among young women it remains very much under the radar.

When caught early, it can be very treatable. But, the potential seriousness of thyroid cancer cannot be easily dismissed. “Although most people have the curable form of thyroid cancer, there’s a small percentage that have a very dangerous type and they often don’t live longer than five months,” says Banach.

What also makes thyroid cancer so unique is the way it’s diagnosed, explains Dr. Alice Cheng, an endocrinologist at Credit Valley Hospital and St. Michael’s Hospital, and a member of the Medical Advisory Panel for Thyroid Cancer Canada. “It’s often detected almost by accident. People may be having an ultrasound for an unrelated condition and a nodule in the neck is detected. Or, a person feels a bump when they apply face cream, or you notice a lump in a friend’s neck.”

It’s also unique in that treatment for the disease rarely involves chemotherapy or radiation, but rather requires surgery in which the thyroid gland is partially or completely removed, followed by a dosing of radioactive iodine. Patients are required to ingest the substance and then endure three days of isolation in order to ensure they don’t endanger others with their body’s radioactivity.

Afterwards, as the thyroid is an essential gland that regulates metabolism among other body functions, patients must receive hormone replacement therapy for the rest of their lives. Unfortunately, there is no standard dosage and the amount needed varies widely between individuals. Until the correct amount is attained, which can take months, patients can experience the following symptoms: fatigue, depression, weight gain, and an overall sense of poor well-being.

“Although most people have the curable form of thyroid cancer, there’s a small percentage that have a very dangerous type and they often don’t live longer than five months.”

Thyroid cancer survivors also have a lifetime of medical monitoring ahead. “Thyroid cancer has a very high recurrence rate — up to thirty percent,” says Banach. “So unlike other cancers where the patient may be followed for a few years, we are monitored for the rest of our lives. With thyroid cancer we don’t ever use the word remission; we just say there is presently no evidence of the disease.” Patients are often told by their doctors that they have “the good cancer” — but that does little to help with the fear, anxiety, and worry that so many people experience when they receive a thyroid cancer diagnosis.

While raising awareness about thyroid cancer is essential, Dr. Cheng emphasizes that certain people may be at higher risk. “People with a family history or who have had exposure to severe radiation (not like that from dental X-rays or a CT scan) should have their thyroid checked. But in general, most nodules are benign.”

But the rare nature and low fatality of the disease does not mean that those who are afflicted are immune from the fears and stress that any cancer patient endures. “We need emotional support,” insists Banach. “Having thyroid cancer is like living with a chronic disease. Once you’ve been diagnosed you have to take hormone replacement pills and be monitored for the rest of your life. We are not just statistics; we are people, and having cancer, no matter what kind, is scary.”