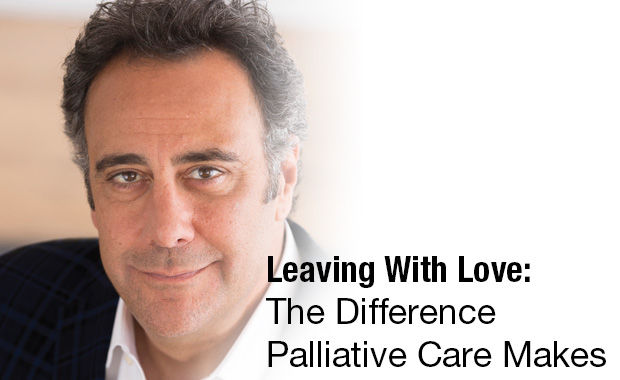 “I lost my best friend — we were literally like brothers — and I lost my father and my biological brother, all within a three year period, to cancer,” says Garrett, best known for his role as Ray Romano’s brother on Everybody Loves Raymond.

According to the Canadian Cancer Society, cancer is the nation’s leading cause of death. Nearly half of all Canadians will develop cancer in their lifetime and a quarter will die from the disease.

Facing death is a universal fear, but end-of-life care, also known as palliative care, is designed to make the most of a patient’s final days.

“There was so much dignity,” says Garrett, remembering his friend’s final days at a Nevada hospice. “So much love and care that my friend was surrounded with.”

Palliative care and hospice staff work to ease patients and their loved ones through an unthinkably difficult time.

“They all just seem to have a real strength,” says Garrett. “A strength that makes the patient feel protected, so that these poor people who are facing their last days feel that someone has their back beyond their family, beyond their loved ones. You need that medical staff that really makes you feel that you’re going to go out the best way you can.”

In Canada, hospice palliative care programs aim to give patients more control over their remaining life, manage symptoms and pain, and provide support to those they leave behind. “They’re really like angels,” says Garrett.

When Garrett and his wife welcomed new life into their family, it inspired him to help the families of children with life-limiting illnesses.

“They all just seem to have a real strength, a strength that makes the patient feel protected, so that these poor people who are facing their last days feel that someone has their back beyond their family, beyond their loved ones. You need that medical staff that really makes you feel that you’re going to go out the best way you can.”

“When I was lucky enough to have two healthy kids, I said to myself, I’ve got to do something where I can help these families because there’s nothing more frightening than losing a child or having a child who is ill,” says Garrett. The actor started the Maximum Hope Foundation, a non-profit organization named after his children Max and Hope, that helps nearly 150 families per year with daily necessities – everything from mortgage payments to car repairs, to groceries.
When Garrett later experienced end-of-life care alongside his loved ones, he was further inspired to help.

“Through the care that I’ve received for my friends and family, I just felt that going with dignity, without the pain, the best way that the country will allow their patients to go, was something that I wanted to be involved in,” says the palliative care advocate.

After what he’s witnessed through his foundation and with his loved ones, Garrett says that in the end, it comes down to celebrating the life of each patient.

“It sounds corny, but you’ve really got to celebrate the life, the memory, and what they left when they were here,” he says.